This year I have eased back the miles on the running, particularly the longer distance ones, the main reason to manage wear and tear on the body as the years go on. I would not say I have abused my body over the years but it has had a harder life than most I think.

So you have to keep the adventure spirit going in some way and with less big Adventure Races planned I started doing more self-supported and extended MTB rides, exploring all corners of the Dales, some forays into the North Pennines, Southern Scotland and Cumbria. Sometimes taking the lightweight tent and sometimes using bothies, sometimes on my own and sometimes with company. There are a lot of bothies in cycle reach of Settle and they also link up to make some good tours. A bothy is really basic, usually just having a wood stove, however after a hard days peddling and especially if the weather is bad, getting inside a dry bothy is like heaven – even better if there is some wood left in there, to light a fire and get warmed up.

At the back end of last summer I was in Riders Cycles at Skipton, chatting to Stuart (the owner) and he suggested I try his YD200 route, he is big into his bike packing! He had organised this as a Bikepack event a  month earlier and said it was popular, I was away with work and could not do it. So on one fine Autumn morning I set off, as the route passed our house I started it from there, rather than Skipton. And indeed it was fantastic and the riding conditions near perfect, but it was a long day in the saddle (14hrs non-stop). Happy with finishing that, Stuart said he had a YD300 planned for mid 2016 – so I said it would be rude not too!

I was slightly apprehensive the last week before the ride, as I had never ridden that far before off road. I had also been given a different bike to use a Trek 29+ – basically a fat bike with 3” tyres, it was heavier than my Chiru 29er, but it was a really comfy ride and much quicker than I was expecting it to be. I planned to go light and fast and not to do an overnight bivvy, which many riders would opt to do, as sometimes I prefer to ride at night and manage with no sleep, it is really exciting, especially zooming along under the beam of the bike light and with the moon peeping through the clouds.

40 riders where at the start, and a civilised time of 8am with a social breakfast provided, it was nice way to start things off, sun shining and a real mix of bikes and people – it was going to be a good, good day. Stuart set us all off in what was a very steady, lethargic start (and Stuart did keep saying it was not a race, in fact it was known as an Independent Time Trial (ITT) – no support, no kit caches, or pre-booked accommodation etc etc.) We were all rolling, myself not wishing to bimble along all day, picked up momentum and slowly rolled passed everyone and by Embsay I was out on my own and in the far distance behind a string of bikes slowly pulled up the hill over into Wharfedale, and that’s the last I saw of anyone. I planned to push hard, several hours of rain was forecast for late afternoon and I wanted to get some distance in. Dale after dale was covered, slowly working my way up towards Reeth, via Nidderdale, Coverdale, Wensleydale, Apedale, mile after mile…

In Reeth I called into Dales cycles for a couple of cans of Coke and some cake, had a quick chat with the owner, who was keen to hear of progress and was off 4 minutes later – 73miles done. Now raining quite hard – Waterproof top on and hood up and pressing on to stay warm, up the massive Fremlington edge, then over to Arkle, then Gunnerside, this was a milestone, some 95 miles and half way and now heading south – yippee all good, but a bit damp – 7pm and it had stopped raining. Over to Wensleydale we go, up the huge Cam High road to Newby Head, then down into Dentdale. A second stop for more Coke and crisps at the Sportsmans pub, I was his briefest customer that evening, another 4minutes stop, the second in only 14hrs. By this stage gates where becoming a nuisance – I had opened a hundred of them! The climb over the back of Whernside to Ribblehead was tough, I felt some tiredness in the legs and my climb rate slowed. 11pm at Ribblehead and time for lights, the night had begun – 64miles to go, just look after yourself and on very familiar territory, so no need to navigate. I have a good memory for routes and with the previous 200km ride I managed to do it all off memory, but with more unfamiliar territory on this ride and the extra distance I needed several more map checks – a wrong turn and several extra miles is not what you want, so it always pays to have a 30 second stop and check. 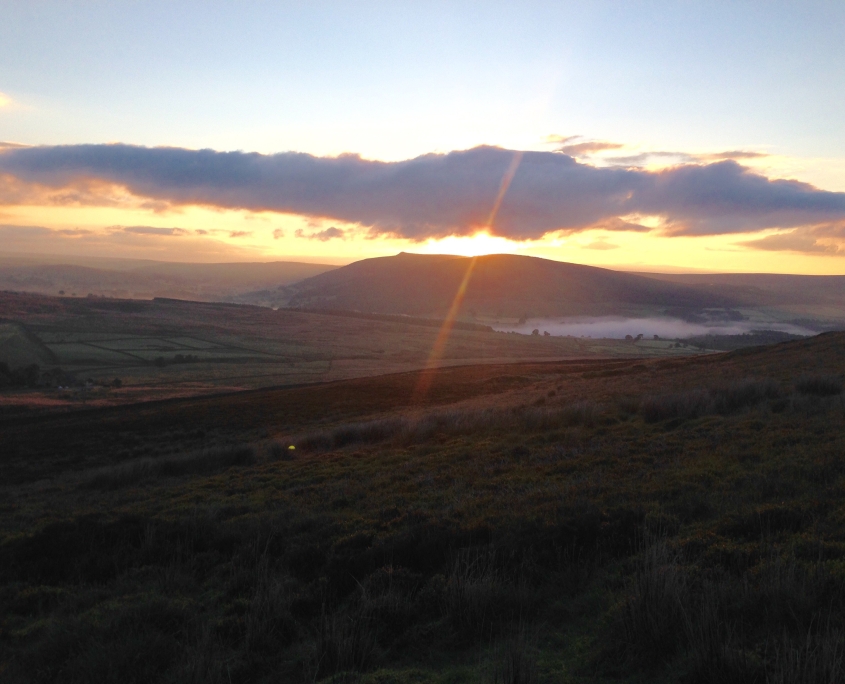 The eyes were quite tired now from the wind, 4hrs of rain and riding concentration, so I had a caffeine gel at midnight which picked me up, I reckoned my ETF would be 5am, thinking it would take 21hrs in total. The routed winded through Crummack, Feizor, round the Settle Loop over to Malham, along Mastiles Lane towards Grassington and then just 15 miles to go – still all off road though. It was nice to see brother Roger at Stainforth, unable to resist the lure of a night ride, he joined me for the last 42 miles, Roger struggled to grasp the concept that I had already done 148 miles of MTB, thinking 42miles was a good ride! The company was lovely and we shared the night adventure, seeing owls, shooting stars and then one of the best sunrises possible from the top of a misty Barden Moor. By now just 5 miles to the finish and almost all downhill, it was 5am, we were in no rush, but the downhill provided some lovely progress and by 5.20am we were whizzing down the High St of Skipton, 8min later all finished and off the bike at last at Riders Cycle Centre on Engine Shed Lane.    Job Done! 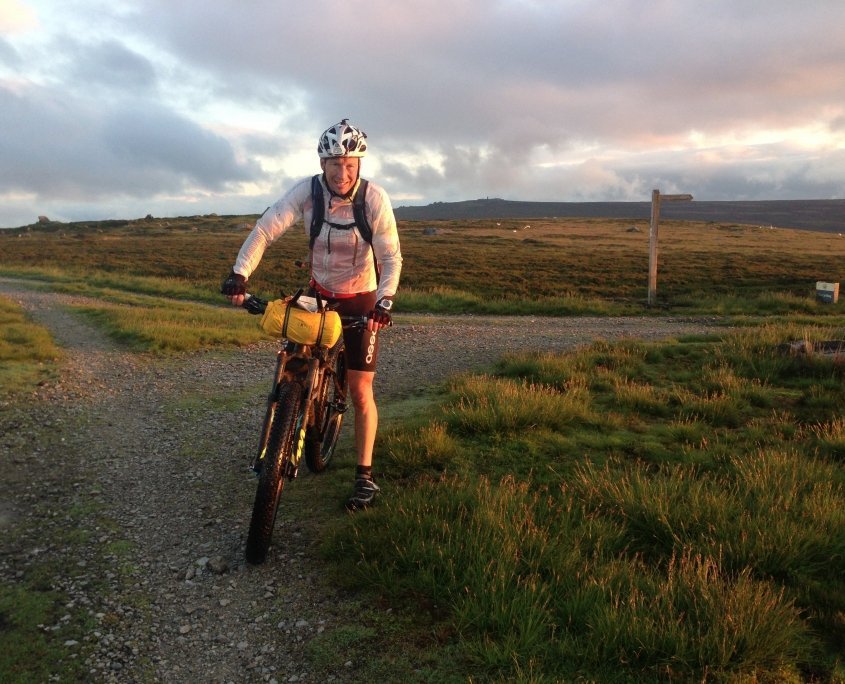 It would have been nice to have someone else pushing me along or to share the ride with, last years quickestrider another Stuart (Cowperthwaite) from Arncliffe, was not doing it due to an injury, shame as we would have been well matched I expect. The hardest part on an endurance event, is feeding the machine, your stomach has a hard time and often craves for stuff you have not got. I ate 16 choc bars, 1 cake, 2 butties, 4 gels and a pack of Haribo, 2 FGS, some biltong and a couple of pepperami, oh and 2 bags of crisps, 3 cans of Coke and about 5 litres of water and electrolytes. I had expended 13000 Calories, completed 190.7 miles and almost 22000ft of climbing. No punctures, no mechanicals and no crashes.

So if your run legs are tired, give the bike a go and explore. Get some lights and have a night adventure, or bivvy out, or go for luxury and try a bothy. Make the most of the long days and dry trails! Try a bike pack. Give me shout for help.