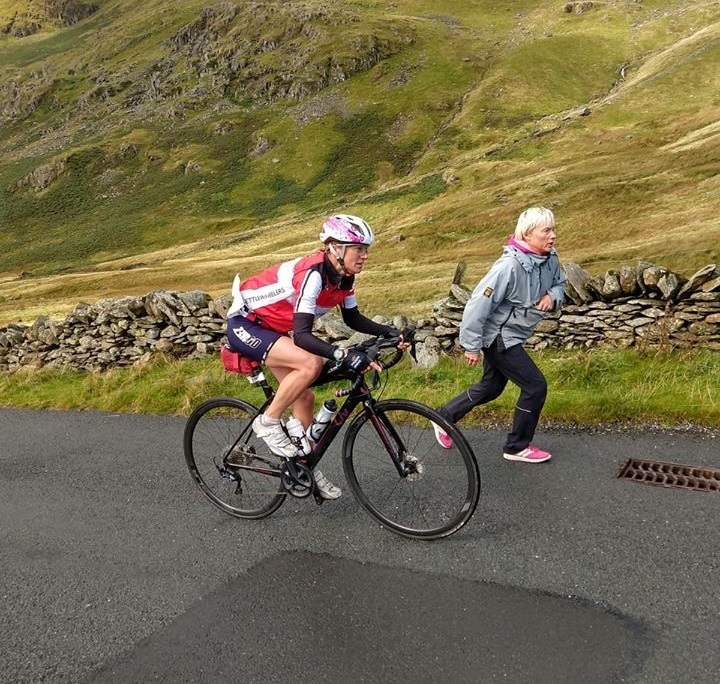 Having dabbled in one or two triathlons each year for three years and been somewhat injured prior to each one I decided I needed a plan this year. So focusing on running injury prevention I hired the lovely Jill Eccleston to help me. Strength, conditioning and engaging brain before enthusiasm was my given goal. Mmmm, the brain bit was tough but think we are nearly there!

‘A’ race set and many months later I’m focussed and injury free (apart from the Morton Neuroma in my right foot which I refuse to have operated on, for now). The inaugural World Triathlon Series in Leeds 12 June on closed roads – how cool is that! My plan was to do what I do on the swim, go hard on the bike and see what happens on the run.

Trying my best to keep the nerves under control in the morning so had a warm up and ignored everyone around me flapping. Onto the swim pontoon feeling ready, when I overheard someone say there was a different exit out of T2 (should I be panicking!!), we briefly spoke about it and I decided not to worry I’d work it out when I get there. I entered Waterloo Lake, deep breaths, here goes (bit of a giggle as I briefly lose control of my excitement!). I was alone for quite abit of the swim which I don’t like as I prefer to have others around me, even if they do hit and dunk you! The back straight was choppy but I felt confident as I was used to that having spent a few trips up in Windermere. Out of the Lake and a 400m run uphill into transition. Another 600m run downhill pushing the bike, carrying cycle shoes and the bag filled with wetsuit, not easy (some very unhappy Triathletes!). Over the timing beam, shoes on, head on, Game On!

First bit was hilly but you could still push on, fast section towards the downhill bit for more fastness (is that even a word?!). I had a quick look at the second turning point whilst going downhill, seemed tight. Powering on into the City and another giggle bursts out as I saw and heard Ian & Jessica which gave me a boost. Tight turning point to go back up the hill out of the City again, a mile on and now I start to feel as if I was tiring and just had to keep those pedals turning so lots of talking to myself and looking at my ‘special’ words written on my bike helped me to concentrate. I wasn’t expecting so many people on the bike course which was a little dangerous at times especially when they wandered to the right as you were overtaking! Heading towards transition and people were slowing and marshals calling to slow down and my reaction – there’s no way this girl is slowing down until she sees the timing beam. Into T2 and I misjudged my racking point costing me a good 10s, bit annoying but never mind. Run shoes on, piece of kendal mintcake in hand I set off to find this allusive run exit!

Pain, pain and more pain. I really didn’t know what was happening but my entire chest was getting tighter with each step. Saw Ian & Jessica which gave me a nudge to keep going. Second lap and the pain was worse so I closed my eyes whilst running to have a think; legs ok, glutes ok, core ok, arms still driving ok – opened eyes and decided to ignore the pain and get on with it. And on with it I did – a personal best on the run, whoop whoop – suck that pain!!