Jules and I have just completed the Lakeland Lanequest summer league. The concept of a Lanequest will be familiar to those who know about Mountain Bike Orienteering (MBO). These are bicycle-based orienteering-style challenges, in which competitors are given a pre-printed map with a number of controls marked on, which they try to visit. Unlike true orienteering where all controls must be visited in the designated order, the standard format in the UK is to visit as many controls as possible in any order, with the event having a specified time limit. We were doing MBO events way back in the mists of time when they were actually known as trailquests, winning the tandem title in 2000 thanks mostly to being pretty much the only team in that category. But we’ve been abroad for most of the time since then and have only re-started recently so are feeling a bit rusty.

In contrast to the off-road nature of MBO, lanequests take place entirely on roads, though these can be a bit rough in parts. The high density of controls and short 2h time limit make it a rather frenetic rush of map-reading and pedalling madly interspersed with jumping on and off the bike to punch the control on the scorecard, with the occasional gate and slow tractor added to the mix. While the fastest riders just have to work out the quickest way round all the controls, most of us have the more complicated decisions of working out how many and which controls to miss out, and having to make route adjustments on the fly when we find out how testing the course is. 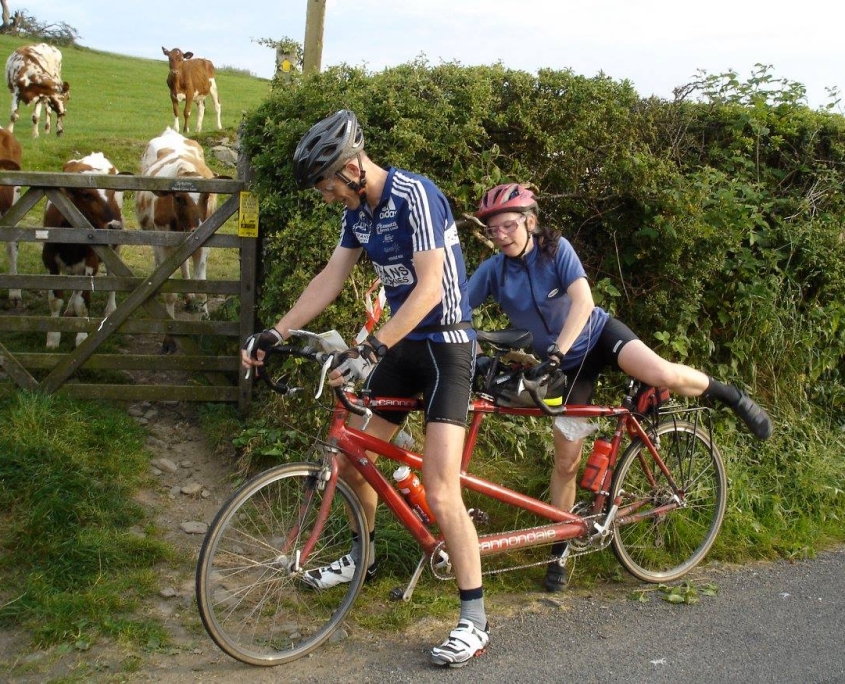 Now in their 21st year, the Lakeland lanequests took place on 6 consecutive Tuesday evenings over June and July, each one being based in a different village with a cheap pub dinner and pint to follow, and with the best 4 results contributing to the overall league result. Each event used a different region of picturesque country lanes to ride, though we didn’t have a lot of time for enjoying the views! By the time the final event came around last Tuesday, we were sitting in 2nd place overall in the team competition, with the top three teams all sitting within a single 10 point control of each other. So with everything to play for, we had our eyes set on a fast ride and a good score. The final event was based around Staveley (Wheelbase being the main sponsors), and here is the map:-

The map was slightly unusual due to the large number of bridges still under repair from last winter’s floods. As a result, the route choice was fairly straightforward – we quickly realised we had to go via Garnett Bridge (twice) to cross the River Sprint in order to reach the 9 controls beyond the A6, with the obvious bit to miss out being the three widely spaced controls in the SW corner across the A591. We were blessed with fine weather and no navigational or mechanical mishaps and cleared up the remaining 27 controls with just over 2 minutes to spare. Despite winning this event with the highest score of any team all season, we failed to overhaul the eventual league winners by a mere 3 points. Maybe next year…

The 22nd Lakeland Lanequest League will no doubt start up again next summer, but for those who can’t wait that long, Kent Valley RC run a similar winter lanequest league on the first Sunday of every month from Oct through to March.

The best way to keep up to date with the events seems to be the Facebook Lakeland Lanequest page for both the summer and winter leagues. There are categories for senior and junior solos, teams of 2 or 3, and family (generation) groups. And unlike fell running you don’t come back covered in mud!