Lakes in a Day seemed to have been a long time coming. Looking back now, from beneath an ice pack, I can’t believe it’s over.

Caldbeck to Cartmel, via High Pike, Blencathra, Clough Head, the Dodds, Helvellyn, Grisedale Tarn, Fairfield, Ambleside, Claife Heights, High Dam, Finsthwaite, Newby Bridge and Bigland Tarn. Variously described as anything between 48.6 and 53 miles, 13,000 and 16,000 feet of ascent (depending on whether your poison is Garmin, Suunto, Strava or Open Adventure tracker).

The Harrier LIADers and LIADettes – Debbie, Ruth, Pete, Helen, Loz, Simon, Dave, Mark, Mike and myself, plus Estelle and Ben, had put months of training into this one day and as October 7 approached, it started to look like the best laid plans were coming awry.

Debbie was suffering severe back pain – something she’d not experienced since giving birth to Mark. Loz was recovering from a particularly nasty virus, my glutes/knee/lower back were generally dropping off and Mike realised he had passed up a free bar to do LIAD!!! (Steph, sensible girl, chose the wedding with the free bar!) But it all unravelled big time on Friday night when Helen went down with a really horrid sickness bug/food poisoning which meant she had no choice but to pull out. We were all so gutted for her, it was a real blow. Happily she is now OK, but what bad luck. She had trained really hard for it and was surely heading for a great day (next year?).

And so it began. A big thank you to Ruth’s sister, Tanya, for taking us to Caldbeck where we all met up, faffed and generally queued for the loo til the off.

Pete reported he had picked up an injury at registration – poor footwear choice led to a blister developing just hours before the start… and the banter began !

What a journey! As the race organiser, James Thurlow, said, not many events truly deserve to be called ‘epic’ but this one did. He’s organised a lot of events, so he knows. I have honestly never been out running for so long in anything quite as wild as that – take a look at the various videos doing the rounds on Facebook for the proof. And in another first for me, at one point another runner grabbed me to stop me being blown away.

But after a while we just got used to the discomfort and relentlessness of it all. It stoked a determination to ‘crack on’ and the atrociousness made it quite appealing in a “Thank goodness I’m alive” kind of way. I discovered that actually, I quite like wild weather!

So apart from surviving Hurricane LIAD, how was it for us?

We settled into pairs fairly quickly. Loz and Debbie – Debbie: “At the foot of Helvellyn as a result of too many too strong painkillers I started feeling nauseous. From there to Ambleside I couldn’t eat anything. I kept stopping and retching but it didn’t help. Spent about an hour at Ambleside in a daze. Loz was amazing and got me sorted forcing pizza and pasta down me adding to the festering gloop in my stomach. Next 22 miles was spent running for five mins, retching for 2 then walking. So run/retch/walk repeat. Finally waahoo I threw up just before Finsthwaite!! I felt like the Very Hungry Caterpillar ‘ after that I felt much better.’ (I didn’t eat through one nice green leaf though) What I threw up (and there was a lot of it) resembled the rotting leaves from the muddy puddles we were wading through! Poor Loz had to stand there and listen to it all. Thankfully it was dark. Because I felt better I then ran off leaving Loz behind and got to F first and got soup a roll and a chair for him. It was the least I could do having literally pulled me up the hills. We then managed to run/walk the last 7.4 miles through all that mud. A quote from Pride and Prejudice came to mind: “Her petticoats Louisa! Knee deep in mud! What does she mean by scampering around the countryside??” I did ask myself that question when I fell into a quagmire up to my knickers and my elbows – my knickers are still dirty after 3 washes. If it hadn’t been for Loz I’d still be sat in a daze at Ambleside.”

Simon and I – Simon: (The only negative comment I heard him say all day): “We’re nearly at the YMCA which means That Bastard Hill.”
(On ‘TBH’ I played a particularly good game of ‘worst swear word top trumps’ in my head – it’s about eight miles from the end, is VERTICAL and you follow a previously washed out and unrepaired path full of slimy rocks.)
Me: “Can I have some more drugs yet?”
Simon: “We could roll up maps and snort paracetamol.”

Ruth and Pete – Pete (on the way to Caldbeck): “Fifty miles isn’t that far.” Ruth (at the end): “I could have done with the finish being at Finsthwaite, but overall I loved it. Halls Fell was really exhilarating!” 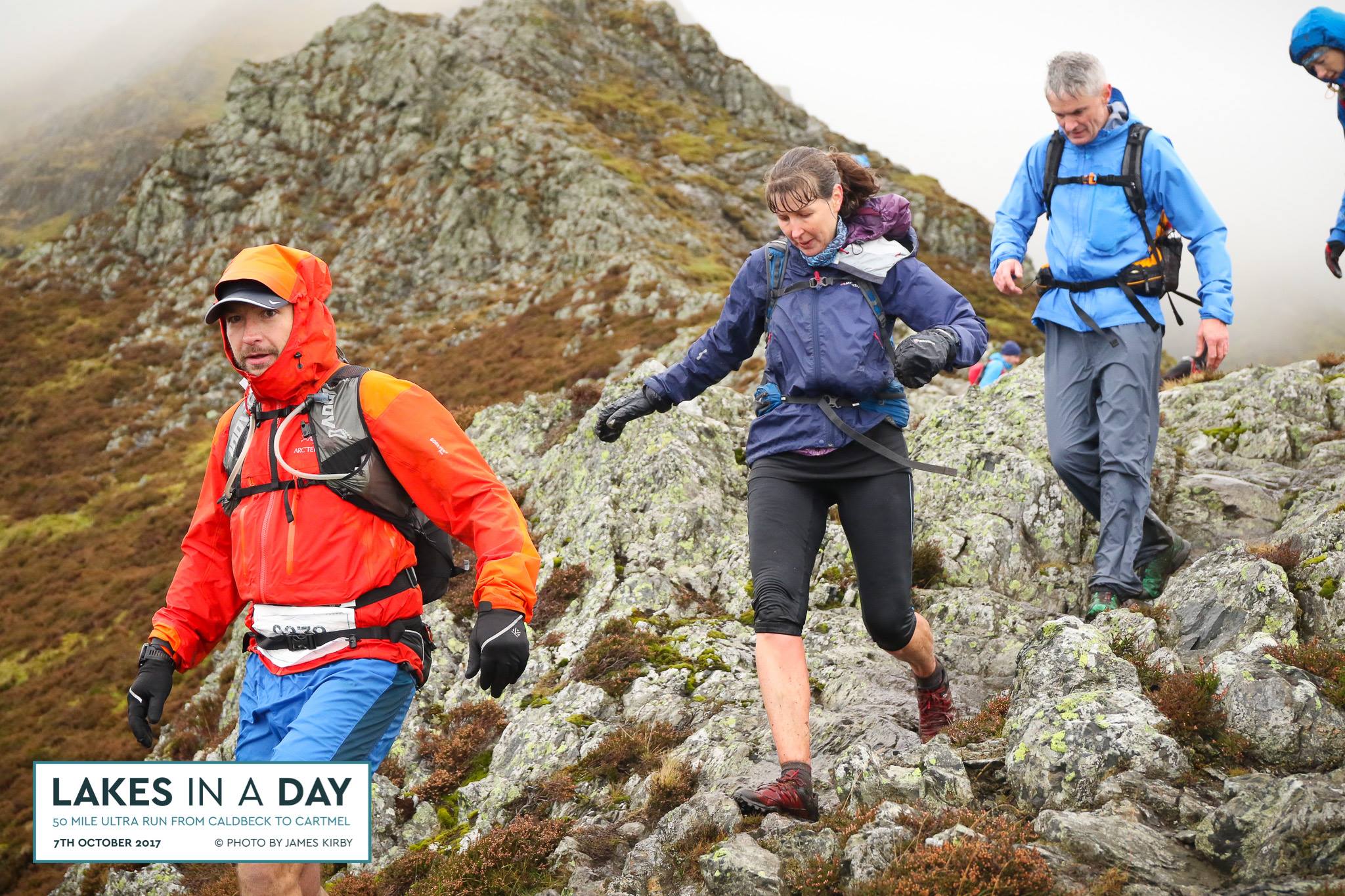 Dave and Mark – I have no quotes, but I have it on good authority that chaffage occurred; Debbie had fortunately packed Germolene and no more can be said in polite company… They had a fantastic time, though and will surely be back next year.

Mike – had an amazing run and was in Cartmel in plenty of time for last orders. Result!

Throughout the day I drank a number of ‘best cup of tea, evers’ wrung out a few pairs of gloves and marvelled at the number of people in shorts.

The checkpoints were amazing – plentiful food and drink that you actually wanted to consume after a battering on the fells (Tea! Crisps! Homemade soup!) and wonderful, smiley, helpful staff and volunteers. We could not have been better looked after.

The first section had all the big hills, the second section was undulating. The first bit had the rocks and bogs, the second had mud, mud, mud (and rocks and bogs). After Ambleside, I was significantly slowing down, but Simon still had plenty of running in him and will no doubt return to smash out a massive PB – a big thankyou to him for sticking with me til the end.

Very well done to all. It’s an event I can recommend very highly – crikey, it’s hard, but you get a lovely T shirt and a dizzy sense of disbelief and achievement which will probably last until Christmas.