Looking at this picture of the descent to the finish of the OMM* on Sunday you’d be forgiven for thinking it was a soft option this year.

The results at the overnight camp though give a fuller picture of what it was like on the first day:

Loz sent me an email later to check up how it went and commented “it seemed a bit breezy but not flithy…”. I think he’d been looking out of the window at Wilf’s Café at the time. In truth, it wasn’t so bad but up at Esk Hause (about the highest we got) it was certainly a bit breezy. And also a bit cold, a bit wet and a bit hard to see anything beyond your nose. I’m not sure really why there were so many retirements but I guess a combination of it being difficult to find controls in the clag and a disinclination to hang around searching too long for them with a wind chill of around -10C.

Hilary and I were in the Short Score class (along with Jan and Mick) and that’s generally a good choice if the conditions are bad because you can just adjust your target to what you can achieve in the time available. At least that’s the theory, but we screwed up badly and my over ambition and unrealistic expectation of what pace we could achieve led us into a situation of being too far from home with not enough time to get there in the 5 hours allowed. Actually, I think that’s a sign of a good course design and we fell into the trap set by the course planners who place tempting, high-scoring controls to make you do this.

Two smiling young lads we met at the start

From the start we’d toured the western edge of the Langdale Pikes, down to Langstrathdale and back up to Glaramara. Roundabout Allen Crags (pretty much on the Borrowdale race route) we were amused to be approached by a Scandinavian pair asking for directions. It’s not often that happens – they mostly seem to be born with a thumb compass attached. There were more people wandering around Esk Hause looking a bit dazed, including one guy who could hardly talk for his teeth chattering. I hope he got down quickly.

Dropping down to Langstrathdale. I’ll swap a Jelly Baby for a Sheepfold, South Side.

From Esk Hause it looked on paper to be a fairly long but easy run down Eskdale and Mosedale to the campsite at Cockley Beck (bottom of Hardknott Pass). In practice it was either scrambling over greasy rocks or wading through the bogs of Great Moss, with minor detours to collect controls to lessen the impact of the now inevitable time penalty. We were also rather hampered by Hilary’s developing knee problem.

The end result was that over the day we collected an impressive score but lost most of it through time penalties after being over an hour late. At the camp then, we were 83rd out of 163 starters. Jan and Mick had a far more sensible approach and were 44th with an elegant 12 minutes in hand at the finish.

The campsite was OKish but the only flat bits were under water. At the OMM you always get that ‘extra hour in bed’ on the night of the year you least want it. In the interests of saving weight I’d brought along my new OMM Lite sleeping bag – with an emphasis on Lite. You could easily mistake it for a screwed up hanky but with four thermals and a duvet jacket I pulled through.

As you can see in this picture Hilary seemed unstressed by the situation and claimed to have been very toasty. I’m not sure how she got all that stuff in her rucksack. Hmm come to think of it perhaps I should have been more questioning when she suggested she took my bag off to the toilet for 10 minutes. At least I never needed the parachute.

What a difference a day makes – Sunday was a lovely morning although still a bit chilly down in Cockley Beck before the sun appeared. It would have been a great day to rack up a tally of points in easy conditions but our strategy was dictated by Hilary’s knee not bending by more than a few degrees. There were many retirees trudging along the road up Wrynose Pass and over by Blea Tarn back to Great Langdale but we thought we’d try to spend at least some time on the hills so we took a Brufen-assisted route over Cold Pike collecting a couple of controls on the way. It was great crossing the routes of the Duddon Fell race and then the Langdale Horsehoe race, mulling over the different conditions you see these fells under. This one was a fabulous autumn day and we cracked along at a good 2km/h with Hilary using her poles more like crutches. 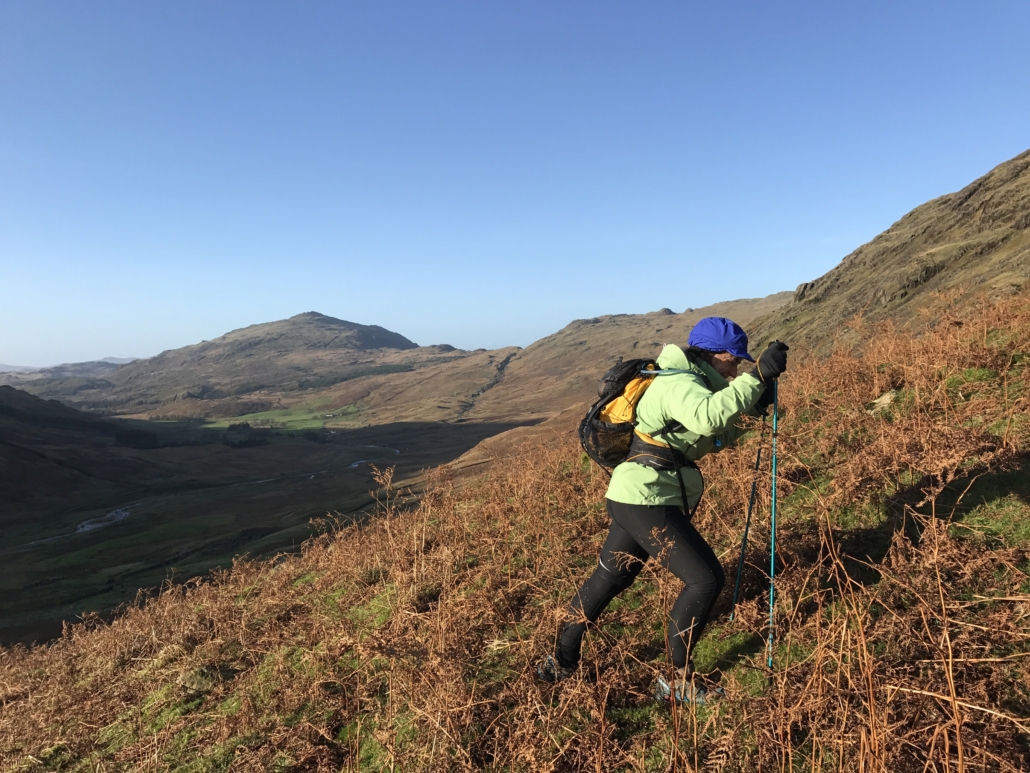 Straight is the gait – nice view of Harter Fell

We finished with a good 30 minutes in hand but no other controls seemed viable with a straight leg so we were happy to end up only losing a few places on day 2 to 88th. Jan and Mick had a great second day and moved up a long way to 27th overall. It was great to see a smiling Sharon and Steph in the catering tent handing out hot food and tea.

Getting out of the muddy parking field was an epic in its own right and probably deserves a blog of its own. So that was the 50th anniversary OMM. I hadn’t done one since it was still the ‘Karrimor’ and I still have trouble calling it anything else. Will I be back for more? Quite likely, yes – but I think I’m starting to remember why I ‘retired’ to the safety of the Saunders in July. Will Hilary? Well, for the moment our marriage seems intact but I’m not sure what will happen when the Brufen wears off.

*OMM – the Original Mountain Marathon – an annual 2-day orienteering event carrying equipment for an overnight camp. Held the last weekend of October somewhere in the British mountains. For more details see their website.

For maps of the various course options (both ‘linear’ and ‘score’) of this year’s event see the Routegadget site.

Bob Graham Round 2017 Scroll to top