It was a grey, drizzly day but the fluorescent green of Settle shone loud and proud with no less than three teams in fell running’s big day out – the British Hill and Fell Relay Championships at Grasmere.

We fielded a men’s open, ladies’ open and mixed team in the 2018 edition, hosted brilliantly by Ambleside AC on challenging, classic fell routes in testing conditions, with runners barely out of the clag all day.

Pudsey and Bramley were the well-deserved victors after an exciting day’s racing. Nobody would have bet against Keswick when Carl Bell and Mark Lamb led them home on leg 2 with more than a minute in hand, but a disastrous nav leg proved that going walkabout can happen to anyone. Ladies champions were Helm Hill.

Leg 1 took the runners up to Grisedale Hause then the summit of Seat Sandal before a fast and furious descent back to the Grasmere event centre in a four mile, 2,500ft blast. The slippery conditions showed their bite early on with the next to penultimate field soon earning a reputation as the place to take pictures and videos (there’s a good one on FB called Descending – the Good, the Bad and the Bloke From Horwich, which is fast going viral).

Our runners tackled it brilliantly. Judy took a tumble near the finish which dislodged her dibber and luckily another runner handed it in, but anyone following events live online may have seen a ‘dnf’ appearing for our ladies team early on. Not so! The results were amended pretty quickly – panic over!

Leg 2, seven miles and 2,800ft, was for pairs. It was tough, gnarly and very skiddy taking competitors up to Fairfield, Cofa Pike, Grisedale Hause and back down Tongue Gill. Dubbed the event’s Queen Stage, it was a thorough test of ascending and descending skills which our pairs relished. All of them gained places on this leg.

The nav leg was mainly off-piste and featured bracken, eye-wateringly steep slopes and lots of rocks. Kirsten describes how it went for her and Carol:

A late substitution saw me joining speedy Carol on leg 3, the navigational leg, eeeek! Now, I love an adventure, but I described my navigational skills as ‘rusty’. Alex, Martin and Simon came to the rescue with some quick compass refreshing skills and tips, and away Carol and I went maps and compasses in hands.  We followed the masses and gill to CP1 before we headed further upwards into the clag (the weather was not being helpful). A couple of errors, and a bit of luck and we happened upon the fence crossing (we were looking for a wall) and down to the sheepfold at CP2.  A runnable section on an actual path up to CP3 was quite enjoyable before a calf and gluteal burning ascent in a crawling position towards Great Rigg. Back in the clag and trying to figure out the best descent line to Tongue Gill, actually took a bearing here, yey! Got it roughly right as we descended through a rock strewn fell covered in bracken, it wasn’t exactly quick. Then a quick up and over Great Tongue to CP4. Next, a quicker descent with fellow pairs back down to the finishing field, which was by now very slippy, and producing some interesting running styles and techniques, before being cheered home by the Settle team. And of course, we loved it, what an experience, testing our navigation and we did ourselves proud. It was a grand lakes day out and a pleasure to run with Carol and Settle as always. The whole event was great to be part of with around 240 teams, wow! I’m looking forward to the next relay.

And so to the anchors. Leg 4, for solos, allowed teams to field 16-18 year olds while all the other legs had minimum ages of 18. Settle made full use of this by allowing our talented youngsters, Thomas Marshall and Matt Holroyd to step up to senior competition. Both lads, plus Jess for the girls, smashed it over the four miles and 2000ft trip over Stone Arthur, with what many described as a ridiculously steep, exhilaratingly fantastic descent. 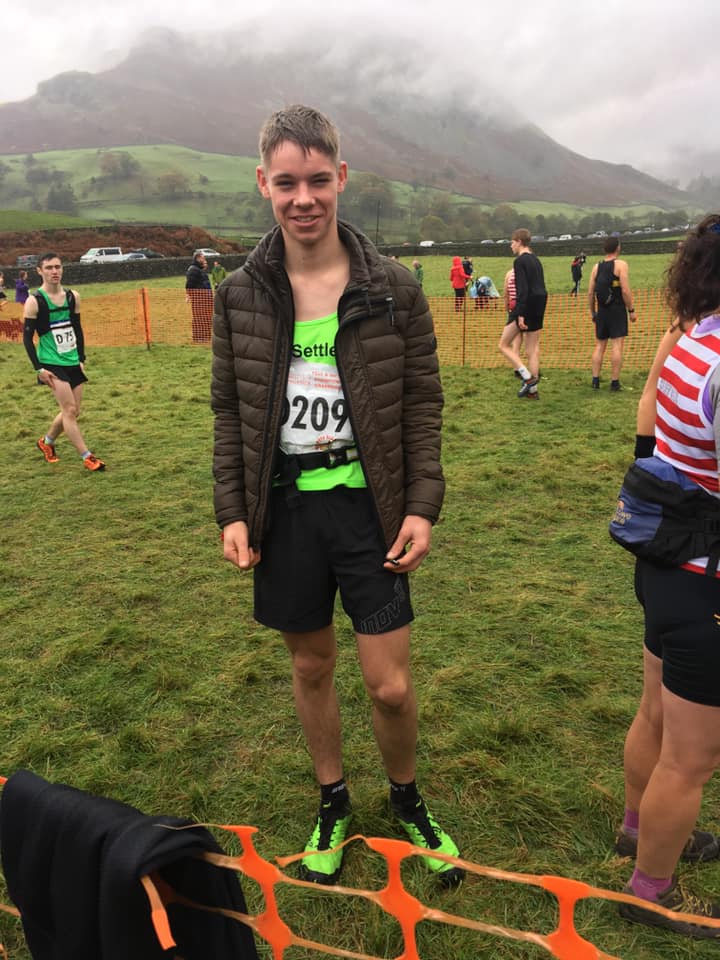 As always, a thoroughly enjoyable day out (for the supporters as well as the runners). A chance to catch up with friends from other clubs, bond with team mates and generally celebrate our wonderful sport. Credit to Ambleside for a slick, well organised event with what were universally acknowledged as excellent courses. Well done to all the runners and a huge thank you to team managers Carol Evans and Roger Laycock for a job well done.

Anyone interested in running next year, it’s being hosted by Dark Peak and the intention will be to try for three teams again. Do let Carol and Roger know if you’re interested!

My First Tour of Pendle
Scroll to top