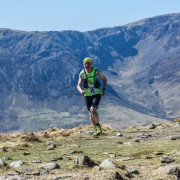 If it hadn’t been the last one I would have left it because six weeks out with the Aussie flu bug meant that my longest run since January had been less than 6 miles – hardly the ideal preparation for an 11.5 mile race in the Lakes with 3500 feet of climbing. However, it was the last one, Newlands is my favourite part of the Lakes and the weather forecast was good – too good as it turned out.

So at 6.45 on Saturday the alarm went off, which wouldn’t have been too bad if I hadn’t been at a Dinner Dance in Blackburn the night before! Roger picked me up at 7.30 and we collected Tom five minutes later. They were both doing the Teenager with Altitude which started an hour before the AW but I needed a lift as SWINW wanted the car. We arrived at registration at about 9.15, I collected my number and went to find what little shade there was and read a book until it was time to go.

The first three miles were straightforward enough but then the climb up Robinson began. I picked a good line but the valley head had turned into a furnace which made it a relief to reach the summit ridge. Once there, I performed my good deed for the day. A lady runner had got crag fast on the Robinson Step and so I gallantly helped her – it was a good excuse for a rest!! I enjoyed the rest of the climb to the first check point on Robinson summit but went for a pearler coming down having caught my foot on a rock. The only damage was a nasty cut on my left hand and slightly shaken confidence.

I had thought that I might reach Dale Head Tarn before being overtaken by the Settle Teenagers but I was wrong. Roger came past me before Hindscarth and Mike at the start of the descent. As for Tom, he was having a flyer despite a sore foot, and I never even saw him.

Hindscarth and Dale Head (with choir!) were soon passed, but then the very steep descent to Dale Head tarn began. Now my descending skills have improved no end on the grassy slopes of the Dales, but this was a different league altogether, both steeper and rockier. However, I made it down without mishap but on the climb up to High Spy I realised that my legs had gone so I was reduced to a slow shuffle- I wouldn’t call it running – for most of the rest of the race. By the time I reached the summit, I was really struggling and beginning to doubt my sanity..

My shuffle towards Catbells and the finish continued. By this time I was cooked. The temperature was into the 20s and despite lashing on the sun cream, I could feel my neck burning. Finally I reached Cat Bells but took a bad line off it and ended up in some rocks whilst other runners were on grass either side of me. I managed to extricate myself and got down the steep grass to the road ok, but the last half mile on the road, although down hill was a killer. At the finish I couldn’t walk in a straight line and the first aiders grabbed me and made me drink lots of water. However, there was free beer available and I decided that I was better off re-hydrating with that instead!

As I write this, the results are not yet out, But I do know John Murfin was 13th in the AW, about 90 minutes in front of me!

It is a great race in a stunning part of the world and very well organised. However, I learnt the hard way that to do these events justice, more training and a recce are necessary, and so preferably is cooler weather. Whoever said that with age comes wisdom? 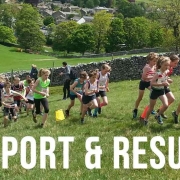 The FRA Junior Championship races at Blacko Hill on Saturday 14th April were also counters for our own Junior Club Championships.

11 of our junior took part and all ran really well over difficult courses which had frequent stiles to cross, causing bottle-necks and queuing, and also some very muddy sections to contend with.  The races were also longer than our juniors are accustomed to.  Parents also faced some serious challenges – finding somewhere to park !

Our results are given below, separated into girls and boys although the races were actually ran together.  Our highest finishers were Seb (4th in the U17s) & Jack and Carl who both finished 12th in the Under 11 and Under 9 boys respectively.

Well done to all !

Well done to all those juniors that took part in the Kendal Winter League this year.  There have been some excellent performances in some very harsh winter conditions !

8 of our juniors will be receiving awards for completing 4 or more races (reduced from 5 due to the cancelled fixture).  They are listed below along with their final positions and points totals.

Only 5 of our juniors made it to Elterwater Common for the final (scoring) fixture of the Kendal Winter League on Sunday 8th April.  All 5 ran really well on a very steep, slippery course which was rocky in places, boggy in others.

Well  done to all those that have taken part in the league this season.  I’ll write another report once the final league positions have been published.