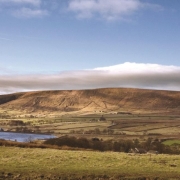 Why? – That is a bloody good question. I blame the Three Peaks. I can see Ingleborough from my house; I walked the Three Peaks when I was 12 with the Scouts; and now I like to run. It seemed to me that trying to run the Three peaks one day would be a good idea so I needed to find some qualifying races that I could fit in around marathon training. The two I chose were the Three Shires race earlier in the summer and The Tour of Pendle.

The recce – I had mixed responses on whether or not this was a good idea. Richard Timms pointed out that a recce might just put me off the idea altogether. I discovered Kirsten was doing the race and so we decided to recce the first half of the course – which I later realised was the easy half. We had reasonable weather that day although visibility was a bit poor on the very top near the trig point. We made our way round very steadily and things seemed to be going reasonably well. About 94 seconds after telling Kirsten that the gradient and ground were far more runnable than the I had found the Three Shires race, we arrived at Geronimo – a very steep drop interspersed with rocky and slippery muddy patches. I came down there with all the agility of an arthritic Grandad (I’m not one). We made our way back to the car-park from the bottom of the slope with me feeling pretty tired and wondering how the second half of the race would be, and whether or not I could up the pace to meet the halfway cut off time on race day.

The race – In the buildup to the race I went to the Harriers speed session on the Tuesday night. I heard various encouraging tales: “Expect to inhale all four seasons on the day”, from Richard; Tony telling me that the other year, it was freezing; he nearly got blown off his feet, the last climb is horrific – “I love it, I’ve done it six times”. On another training run two women from Skipton told me about Pendle, “Its harder than the Three Peaks”, and, “it always snows for that one”. So armed with this encouraging information I was ready to go. Richard assured me I would be fine and do it under four hours. Really?

On the day we were unbelievably lucky with the weather although I still opted for southerner-based kit of long tights, gloves and hat. There was the usual nervous milling about at the start with some ineffectual stretching. As we shuffled through to the start point I bumped into Mark Wildsmith who wished me luck – nice to see a friendly face. We set off alongside the reservoir before breaking up the hill towards the trig point. Early on it was quite crowded so a sensibly paced start was unavoidable. Becky passed me around this point and wished me luck too. As we started to climb up through the fields and onto the open ground I was relieved to see that many of the people around me were also walking parts of it. My target was to finish so I wasn’t going to beat myself up about pace. It was a relief to get to the top and have a flatter section ahead. From the first checkpoint over to the second I took a slightly different route than I did on the recce. Fortunately, because the weather was so kind, I was able to see plenty of runners ahead and pick a similar path to them. In this stretch I even managed some almost sensible pace hitting 7.45/mile. This was to be short-lived though.

Another hard climb from checkpoint three reduced me to walking again. I took the opportunity to shovel an energy gel down and some water and as it levelled off we ran on to Geronimo. I took a slightly different line than previously and while it was slippery, there seemed to be less rock to land on. There was quite a bit of laughing as we all elegantly bounded down the steep slope like balanced, confident, mountain goats. Well…I did hear one person got grass burn on his backside and he wasn’t the clumsiest.
I was delighted to hit the checkpoint 4 cut off in about 1 hour 33 minutes, well inside the two hours required. Now all I had to do was drag myself to the end.

From here on, it’s all a bit of a blur. I know we ran alongside the beck before a fairly short climb back on to the main path on the top. Again, visibility was so clear that there was no danger of getting lost as you could see hundreds of runners strung out ahead. I’m not sure whether it was the climb up to checkpoint 6 or 8 that really slowed me down – possibly both. I know I clocked a 28-minute mile around there…not even a decent walking place. It was a steep, long climb, into a fairly stiff breeze. I was yo-yoing back away from Kirsten at this point. I know she’d had a cold, and I’m not sure I would have kept up with her otherwise. It was a relief to get up on to the top again although it was a bit colder by then.

I was ready for the last climb back up past the trig point as I had been warned about the severity. I plastered a fake smile on my face and set off. It is steep. Doesn’t matter how you look at it. I’m assuming that the faster runners don’t run up this either. There was a brief discussion here between a couple of runners about the possibility of hitting a nightclub later – “unlikely” was the gist of the reply, albeit slightly more abrupt and offensive. I was nearly on all fours on parts of this climb. There was an absolute gent handing out flapjack at the top though – a welcome sugary treat. I had caught up with Kirsten at this point so had some company for the last uncomfortable miles.

As we set off back downhill on the trail I realised that the bottoms of my feet were a bit knackered. I think the Inov8 Mudclaws may be the wrong shoe for me on this type of run – I felt like I needed some more cushioning on the fairly solid ground. But I guess it might just be the distance and lack of experience. I had been warned that this part of the race was the best opportunity to get lost but Mark had told me to keep an eye out for the wall running down the other side of the valley where we had come down Geronimo. Again we could see plenty of runners ahead and due to the great visibility we could clearly see the wall. We made our way down to the final checkpoint with the end not far away.

From there we made our way back down the tarmac road by the reservoir, which was feeling very hard indeed on my tired feet. The finish. Hooray. Thank God. 3 hours 58 minutes 2 seconds. A massive 1 minute 58 seconds quicker than Richard had assured me I could manage – he knows his stuff.

It was a tough race, but then I don’t think anybody considering doing this for the first time would expect otherwise. Its like all these things, you have moments of questioning your sanity; moments of camaraderie; moments of looking at the beautiful scenery; moments of looking at the ominous ascents. I felt confident beforehand that I had the stamina required from running marathons, but I have a long way to go in terms of running technique offroad and have sensibly given myself plenty of room for improvement. Going downhill I am particularly slow and lack courage/am sensible (not sure which). I had done plenty of homework on navigation and bought the race map from Pete Bland sports, but in fact it wasn’t necessary due to the great weather on the day. Obviously relying on the weather being great would be foolhardy round here. I think people questioning whether they should give this a try probably should. I am delighted to have done it and now have the required qualifying races for The Three Peaks.

I owe a big thanks to Kirsten who calmed my fears by accompanying me on the recce. Andy and Carol Evans also have helped me with speed sessions on Tuesday nights that I would recommend to others. And thanks to several other Harriers who offered tips and encouragement who I have mentioned.